Yahtzee is a successor of Yacht and played like many other similar games such as Generala, Cheerio, Poker Dice, Crag, Yatzy etc. Yahtzee has become the most popular dice game among sequence dice-casting games. The game is a trademark of Hasbro, Inc.

The game has 13 categories to score which are divided between two sections; UPPER SECTION and LOWER SECTION. Each category can be scored only once. Categories can be scored in any sequence.

There are 13 rounds in the game. Players can score in one category in each round. Players take turn to roll 5 dice in each round. After each roll the player can set aside one or more dice and then roll remaining dice. A maximum of 3 rolls are allowed to all players in each round. All five dice are available to be thrown anytime in a roll including the ones which were set aside in previous rolls.

UPPER SECTION has a bonus of 35 if players score 63 or more in it. There is a separate Yahtzee Bonus awarded in LOWER SECTION provided certain conditions are met (read on for further explanation).

Following are the categories available in Yahtzee dice game, its scoring rules and description 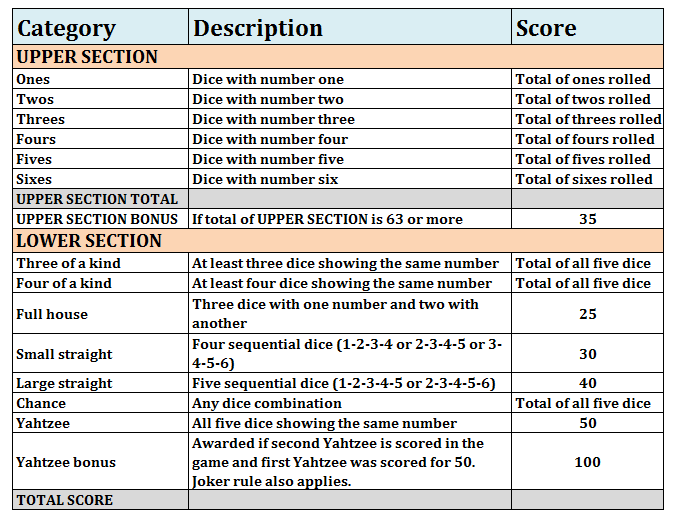 If players can not score in a category, they can still mark it for a score of zero.

When players roll all five dice showing the same number, it is called a Yahtzee. In case players roll a Yahtzee second time, then additional points are awarded to the players provided following conditions are met.

Once all categories are played, the player with the highest score wins.