The objective of the game is to complete 10 phases in a specific sequence and score highest points in the process.

10 custom Phase 10 dice and a scoresheet.

Players roll all 10 dice on their turn and have up to 3 rolls in each turn to score. After each roll players can set aside any number of dice and roll remaining dice. Players can also take some of the dice back for rolling which were previously set aside.

There are 10 scoring phases which players are required to score in sequence starting with Phase 1 and then scoring in sequence from Phase 1 to Phase 10. If a player fails to complete a phase in his/her turn, then he/she must try to complete that phase in next turn. Player can not move to next phase unless previous phases are scored.

When player completes a phase, he/she scores total of all dice used to make that phase. Wild faces which are used to complete a phase have zero value for scoring purposes.

The table below describes each phase and its scoring mechanism. 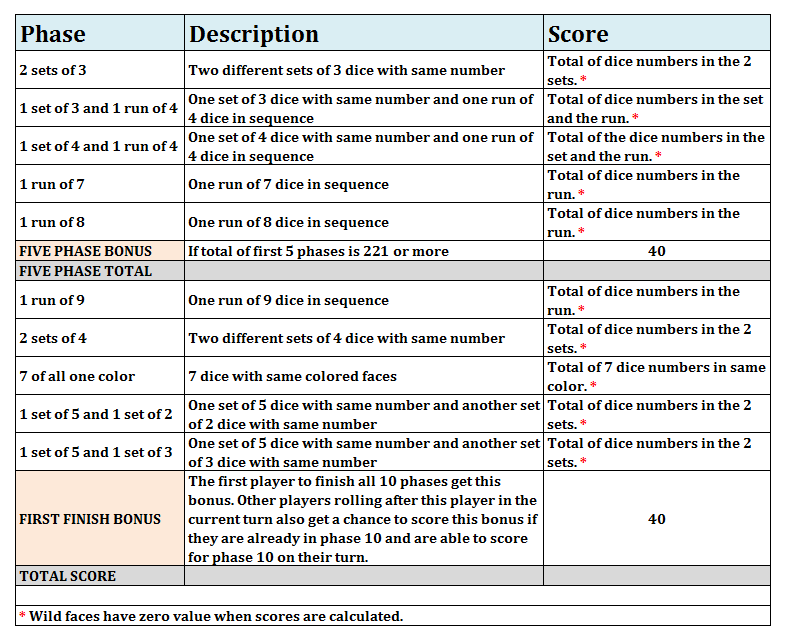 There are two bonuses in the game;

As soon as a player completes Phase 10, the normal play ends and remaining players get one more turn to score as many phases as possible irrespective of whether or not they had already rolled for that turn. The players can score for more than one phases if they can finish their phases in sequence. For ex, if player A completes Phase 10, and player B was on Phase 8 at that time, then player B gets one chance to complete remaining 3 phases so on its turn player B will try to score for Phase 8, and if he/she succeeds, then he/she will try to complete Phase 9 and then Phase 10. If a player fails to complete a Phase anytime, his/her chance gets over and whatever phases he/she has completed in the last chance, gets added to their final score.

Once all players have rolled for last chance, the player with the highest Total Score wins the game. It is possible for player who was not the first to complete Phase 10 to win the game.