The objective of the game is to score points by rolling 3 six-sided dice and making certain combinations.

3 six-sided dice and a scoresheet.

Crag dice game has a quicker game play compared to other similar games such as Yahtzee or Yatzy since Crag is played with only 3 dice and it has just one re-roll allowed.

In each round all players take turn to roll 3 dice. Player can again re-roll all or some dice one more time. More than 2 rolls are not allowed.

Following are the categories available in Crag dice game, its scoring rules and description 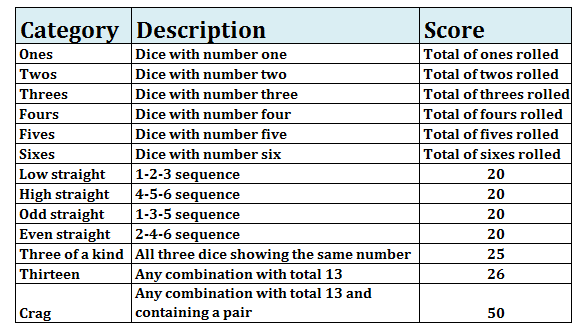 Player can choose a category to play even if he/she scores zero in it according to the scoring rules.

Once all categories are played, the player with the highest points wins.